Are you interested in card games? If yes, you must try Medici: The Card Game. Reiner Knizia has created a brand-new game that borrows elements from his iconic Medici board game while excluding its auction features. Do you want to know about this interesting game? Read the article to learn all about the game. 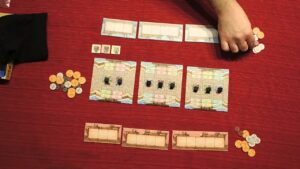 Check out the table below for the key highlights of the game:

About The Game – Medici

Players will aim to collect the most valuable products for their merchant ships by selecting cards from a standard deck in this game, which is set in 15th-century Florence. It is a push-your-luck card game with set-collection features.

This fantastic new card game is the first to be introduced to the Medici family of games since Strozzi, launched in 2008! Grail Games is extremely happy to be presenting it to you after re-releasing Medici the board game earlier this year!

Players will aim to collect the most valuable products for their merchant ships by selecting  1-3 cards from a pooled deck each turn in this game, which is set in 15th-century Florence.

The final card drawn must be taken by the current player, who may also choose one or both of the first two cards drawn (if available). They then fill their boat with these commodities cards. Unused cards are still available to other players. A player is eliminated from the round after their boat is full (7 cards with two players, 5 cards with three to six players).

In addition to the amount of each sort of commodity that a player has in their account, they also receive points for the worth of the holds on their ships. The three-day game is won by the retailer who made the most money.

How Does Medici: The Card Game Work? 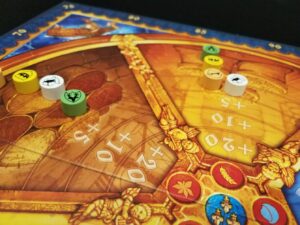 Medici: The Card Game is a 2 to 6-player press your luck set gathering game. Players are traders trying to load their ships with the most precious cargo and to be the top trader in five different commodities. After 3 rounds, the player with the most florins wins.

The commodities deck is first shuffled, and the two-player aids are distributed to each player. Players start by selecting a starter.

Players will flip cards from the deck and load them aboard their ships in turn during each round. 5 cargo holds are aboard each player’s ship, and once these containers are full, the player is finished for the round.

A player may flip up to 3 cards from the deck during their turn and arrange them in numerical order at the end of the round. The player must pick the last card in the line, regardless of how many cards are flipped. The player may also take up to two of the cards that come after them and put them onto their ships. Cards that are not selected stay in the line.

The round is scored after the final player has one more turn after all players with the exception of one have filled their ship. For the most valuable ship, players receive points in descending order first.

Players then score for each commodity by setting their commodity cards in front of them. Commodity cards evaluate each round depending on what players have accumulated throughout all rounds (whereas ship value is assessed entirely new each round).

Components for Medici: The Card Game

The Cards are generally very good. The cards are Euro-sized, and although they could have easily been mini-sized given the amount of information they include, it’s good that they are in this format.

Despite the fact that there aren’t many different pieces, the game looks appealing because of Vincent Dutrait’s artwork. The score coins’ lustrous foil is a pleasant addition. The tiny box is fun as well because it makes the game simple to throw into my backpack.

The 5-value coins are too small and that is my main complaint. They are overshadowed by the 10s and 50s and are insignificant in comparison to the other coins.

Medici: The Card Game excels in being one of the best card games in the market.   It’s a creative, short, and basic but not simplistic adaption of the main game. The ease of turning over cards extends the game to an even wider audience, even though it might turn off ardent Medici players. You and your lunch group can enjoy this game. You can enjoy this game with your family too.