How to get to Nokron Elden Ring? The Elden Ring location, known as Nokron Eternal City is home to a mysterious underground realm. Because the entry to the location is not highlighted in any way on the map, finding it can be challenging if you are not already aware that it exists. There are a few secret bosses in there. Nokron also leads to a different location known as Deeproot Depths. This article will talk about the process of how to get to Nokron Elden Ring.

Learn How to Run in the Elden Ring by clicking on this link.

How to get to Nokron Elden Ring? To reach Nokron in the Elden Ring, follow these procedures.

It would help if you first beat the primary boss, Shardbearer Radahn. You cannot proceed to Redmane Castle in Caelid’s south without first going through the portal that is located at the beginning of the bridge. This causes you to be teleported into the castle. Following your conversation with the cathedral’s announcer, you will need to go behind the building and use the elevator to reach another teleporter that will take you to the boss fight. Only after conquering Radahn can the Nokron area be accessible.

When Radahn is defeated, a hole will appear in the earth northwest of Fort Haight in Limgrave. There you will see rocks floating in the sky above it, which will make it easy for you to spot them. This hole can be seen only once Radahn is beaten! Drop down the hole’s edges in a safe location where the fall will not kill you. After that, ride your horse down the cliffs and jump; this will get you to the underground area of Nokron.

How to get to nokron eternal city Elden ring?

Nokron, Eternal City is an underground area in Elden Ring, one level above the Siofra River. An optional underground sector, it is somewhat more linear than the overworld but keeps many of the overworld’s fundamental features. How to get to the nokron Elden ring? While underground, you can ride Torrent, travel quickly, and restore flasks after destroying enemy groups. This article offers information on the location, a walkthrough, and a guide to traversing this area, finding all of its loot, and defeating the foes within.

How to Get to Nokron, Eternal City?

The waygate to Nokron, where the Dragonkin Soldier awaits, is situated smack dab in the center of the Siofra River. Despite this, Starscourge Radahn must be defeated before entering the city proper. Where do I find directions to Nokron Elden Ring? Once you’ve finished off Radahn, teleport to Fort Haight West in eastern Limgrave, south of Mistwood. When you arrive, an enormous crater can be seen to the northwest, and rocks are spewing from its center.

The building’s northern side features a sloping wall. You can approach the abandoned structure by jumping from platform to platform and entering the tunnel north. You’ll need to go down a level and keep going if you want to get into Nokron.

How to get out of the Nokron Elden Ring?

The unidentified NPC is D’s brother; when you give him the twinned armor, he says his brother’s name, “Darian,” and after you slay the dragon in the deep root depths, “Lichdragon Fortissax,” he kills Fia in Darian’s name. Ranni will refer to herself as Renna after giving you the Elden Ring Spirit Calling Bell, and she’s one of the more intriguing NPCs in the game. You can start her quest and be of assistance to her in some way if you travel to Ranni’s Rise in Liurnia. This is true even if she tells you that you will never see her again. 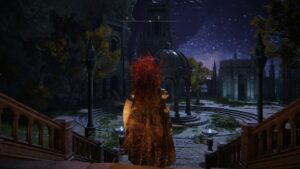 To begin, you’ll enter a vast cavern filled with decrepit cathedral-style structures. Drop down into the roof below, turn right to face east as you do so, and then follow the first column as you jump up to the little square platform, and you’ll notice a body on top of the column to the left of the chasm. Gather the Ghostflame Torch by making a running jump from the northwest corner of this tiny platform to the column.

Next, hurry up the column and leap to the opposite side. From the northern end of the map, launch an assault on a Silver Tear, and then move around the side of the map to fight two more Tears on the left and four Tears atop the roofs on the right.

Follow the thin edge of the building to your left until you reach an open window arch, which may be accessed through the ramp that leads to the roof of the fallen structure. When the platforms are lowered, be wary of the two Fallen Hawks Soldiers patrolling the room and the three archers hiding in the back. The Site of Grace can be found further down the stairs. When you exit the Site of Grace, you’ll find yourself in the heart of a town full of interesting places to look around and explore. Dozens of Fallen Hawks Soldiers are constantly patrolling the area.

Be cautious when going around corners and avoid getting overwhelmed in the region’s heart, where many of them are assembled. There are plenty of Dew Kissed Herba, Melted Mushroom, Silver Tear Husk, and Silver Firefly clusters on the southwest ridge. An extensive set of stairs will go down to the northeast, and when you reach the bottom, turn right to meet a Swordstress and a Silver Tear. Keep going down until you reach the massive pantheon and the ensuing boss fight.

How to get to the nokron Elden ring? Please down to the bottom of the pit and exit it without injury. Drop down the cliffs on your horse, and you’ll land in the subterranean region of Nokron. If you read the guide carefully and carry out its recommendations, you won’t have any trouble accessing Nokron Eternal City. We are appreciative that you have read our post and taken the time to do so. Keep checking back for more content of this nature.