Have you ever played Elevenses? If not, you must try it out. Read this guide to learn about the game. Players compete in Elevenses, labeled “the card game of morning tea,” to dish out the greatest spread of the tastiest cakes, most exquisite sandwiches, and pots and pots of tea.

From the pinky-peach boxes to the 1920s font and graphic style, the charmingly quaint hand-drawn card pictures, to the small (plastic) sugar cubes for scoring, everything in this game exudes a uniquely English charm. Players will start adopting posh accents and behaving all lah-di-dah as soon as they are handed their “Morning Tea” cards.

But the pleasantries will stop there. However, despite what you might think from the back of the box, this game is not the casual, genteel game of polite manners you might expect. Instead, it is a far more competitive game of taking what you can get and outwitting your opponents. Read on to get a good insight into the game.

About The Game – Elevenses 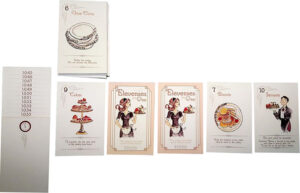 With the same set of 11-morning tea cards, each player begins the round. Each card has a point value in addition to a unique action that needs to be performed when it is played. A card’s power increases with a lower point value. The players interact in unexpected ways as a result of the powers! Additionally, cards must be dealt to a certain spot on the table. You usually pick up the card that was in its place before a card is played, so you need to carefully organize your morning tea.

When someone plays the “Elevenses” card, the round is over. Tea time is here! The worth of the players’ cards is compared. The morning teas with the highest scores are given points. Until a player has 7 or more points, the game continues. She had won the game and prepared the best morning tea of all!

The expansion of six cards Elevenses: The game includes the Special Guests. With this addition, one special guest card is handed to each player secretly at the beginning of each game. Only if you serve certain items during your morning tea will every guest show up. The guest shows up, you reveal the card, and the worth of your morning tea increases if you play the appropriate combination of morning tea cards. 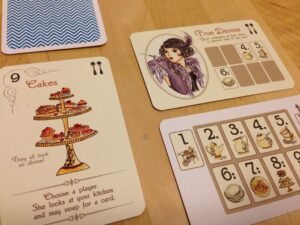 In each turn, you can make one move out of the following: 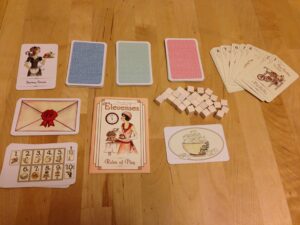 It is crucial not to place the following cards down too early in a round because they are two cards that are not performed into the spread but rather to either side of it, meaning that once they are positioned down the participant will have one lesser card in their restaurant for the remainder of the round, making hand management much more difficult:

The objective of Elevenses is for you to offer the best tea in town while also politely stabbing your buddies in the back. Each item on your spread, such as sugar, sandwiches, milk, and more, is worth a certain amount of spoons. You will each have to manage this spread (points). When elevenses is called, the person with the most spoons wins the game and receives several sugar cubes, which are cute wooden cubes. The player who collects seven cubes first is considered the winner.