Have you ever played Circus Flohcati? If you haven’t, you should try it out. Circus Flohcati is a fun and interesting push-your-luck card game. Throughout the game, players will try to assemble all of the acts needed for a gala event that will be the talk of the town. But be cautious! Any ringmaster who takes too many risks will go penniless! Continue reading to get to know if this card game is the one for you. 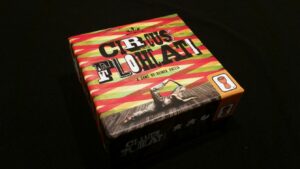 Circus Flohcati is a two to five-person push-your-luck set gathering game. Players fight to gather the greatest acts for their flea circuses, assembling trios and single acts. At the end of the match, the player with the most valued circus wins. 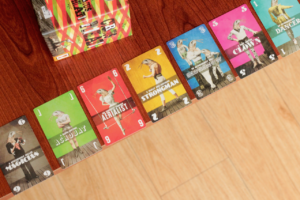 The components in Circus Flohcati are: To get started with Circus Flohcati, the deck of circus performances and action cards is shuffled. The circus acts are numbered from 0 to 7. The active player may show up as many cards as they choose throughout their turn. If a card fitting the suit of an already displayed act is turned up, it is tossed and the active player receives nothing.

If the player does not lose his or her turn, he or she selects one card from the face-up deck. The player could then play any trios, which are sets of 3 of the same number.

There are special activity cards that, when drawn from the deck, force the active player to obtain cards in various ways.

The match finishes when either the deck runs out of cards or one of the players calls a gala. Players receive 10 points for their most valued card in each play, plus 10 points for each triple and 10 points for calling the gala. The one with the most points is the winner.

The Circus Flohcati game could end in one of the following ways: The Circus Flohcati game only takes a minute or two to learn, and players quickly and readily comprehend what they’re attempting to do. Each round, players often have two options: whether to continue flipping cards over and which card from the deck to accept.

Cards score a point in 2 ways: as trios and as part of the game’s finale extravaganza. Trio cards are assured points, but only if 3 of the same number are collected, and they have declining rewards. That is, if you gather three 0s, you will receive 10 free points. You lose 2 points if you gather a set of three 4s.

Trios, on the other hand, are always stable and cannot be targeted by special action cards. You clearly want to choose high-numbered cards, but you may not be capable of drawing what you want, or these cards may be stolen, or even if you have 2 high numbers in a deck, you can only win one of them. The choice of which card to play is usually interesting but seldom too difficult: you are only being tugged in two directions. Players must simply decide which path to take with this particular card draw.

Circus Flohcati is an amazing filler game. It easily ranks in the top 10 card games in the market.  Circus Flohcati suits its niche perfectly and gives fantastic laughs in a compact bundle with a short playtime. This ensures that it will be a regular buddy in your backpack for the coming years.