Grail Games announces Reiner Knizia’s Medici: The Card Game
This all-new design, sister to the classic Medici board game, will be the first entrant to the Medici & Strozzi family of games in nine years, and will feature stunning new artwork by Vincent Dutrait. 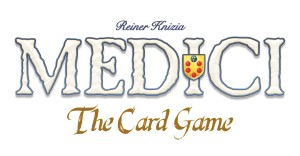 Sydney, Australia – Monday, June 20th, 2016.  Today, Grail Games announced that it will be publishing the English language edition of a brand new game, Medici: The Card Game. It will be available to demo at the upcoming Gen Con in Indianapolis, and is due to be released in Q1 2017.

Medici: The Card Game will be the first new edition to Knizia’s Medici & Strozzi line of games since 2008. While sharing the same setting as the Medici board game, it is an all-new design that, in contrast to the other games in its family, does not feature auctions.

“To create an entirely new game that has the same ‘feel’ as Medici, while offering something different to players, was an invigorating design challenge,” said game designer Reiner Knizia. “Without auctions, the new game is easier for first-time players, but make no mistake, it’s not all smooth water to victory.  I can’t wait to see people playing it all over the world, established fans of Medici and new players, alike.”

Medici: The Card Game will be adorned with stunning illustrations by award-winning artist Vincent Dutrait. “To be asked to revisit Medici was a welcome invitation,” he said. “I believe I have illustrated the game in such a way as to be beautiful as well as highly functional. Medici: The Card Game will be able to sit proudly next to its big brother, Medici, on any gamer’s shelf.”

Medici: The Card Game is set in 15th century Florence. Players will try to acquire the most valuable goods for their merchant ships by drawing 1-3 cards from a common deck each turn. After drawing, the active player will take cards from the display. Cards that are not taken remain available to future players. Once a player’s boat is full (seven cards with two players, five cards with 3-6 players), they are out of the round and the day is scored.

Players score points for the value of their ships’ holds, but also for the number of commodities of each type that they have stored in their warehouse. The highest earning merchant over three days wins the game. Some cards do not take up space on ships, while others contribute to the value of a hold, but cannot be stored in warehouses.

Medici: The Card Game is for 2-6 players and takes approximately 30 minutes to play. The game will include: 110 cards, 50 scoring tokens, and a rule book. An accurate release date and MSRP will be confirmed soon.

About Grail Games
Grail Games is a board and card game publisher located in Sydney, Australia. Our games include Medici, Elevenses, Matcha, Circus Flohcati and Jeju Island. Our focus is on board and card games that are family friendly, fast to teach, and that offer depth and replayability. To find out more, please visit www.grailgames.com.au